Put a Reelsling™ onboard, then go boating. Please contact us for quantity pricing, for purchase of four or more units. This man overboard recovery device helps you get a conscious overboard crew easily back onboard. Float gives 21 pounds of buoyancy, has generous light reflective tape, sturdy grab handle, stainless steel D rings, and whistle. Doubles as lifting harness. Floating 49 m (160 ft) retrieval line does not absorb water; floating line has reflective tracer strand. It is easy to see, easy to hear, easy to stow, and easy to use.

When you mount Reelsling outside on your vessel, tie the line’s bitter end to a strong point (make fast to boat the end furthest from the float). Periodically double–check that connection to boat. The bitter end is covered with UV light resistant rope because it remains exposed to the elements. The Reelsling stays stowed in its bag until needed.

When your crew goes overboard, immediately mark the location with the SOS Marine dan buoy. This gives your MOB a highly visible, easily findable, reassuring float to hold on to and facilitates next steps in recovery. When your MOB reaches the dan buoy, he can give you one blow of the dan buoy’s whistle to let you know his location is at the dan buoy. He can keep using that whistle to give you other signals you could discuss beforehand.

Pull Reelsling Out to Deploy

Pull the Reelsling float out of its UV–light resistant PVC mounting bag and throw it in the water. Pay out astern the 160 foot (49 m) line attached to the red Reelsling float. Because the line’s bitter end is made fast to a strong point on your boat, you cannot pay out too much line. Keep enough way on to maintain steerage and avoid drifting backward over the deployed floating line and Reelsling float.

Turn a circle around your MOB; make your circle 100 to 140 feet from side to side. The float trailing astern will seek the shortest path to your transom as your boat continues around the circle. The line will draw toward the circle’s center as you complete your circle. When the line comes within reach of your MOB, he grabs it. If he’s hanging on to the dan buoy, your MOB can give you two blows of the dan buoy’s whistle to let you know he has the retrieval line in hand. When your MOB has the retrieval line in hand, you can turn and hold the vessel head to wind, or heave to. Your MOB can pull to himself the free end of the line, until he fetches the Reelsling float. The MOB places the Reelsling float over his head and under his arms. The MOB can give you three blows of the whistle to let you know he is then wearing the Reelsling float. Drift back toward your MOB while pulling the line in, keeping line clear of rudder and prop. You draw the MOB to the boat. 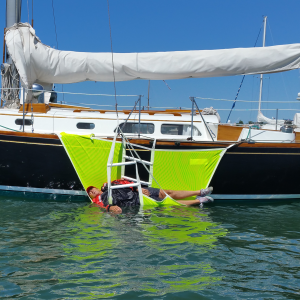 Using a dan buoy in conjunction with the Reelsling makes deploying the Reelsling in a circle around your MOB as easy as possible, even at night. Your MOB’s bobbing head is a surprisingly small target, easy to lose between waves, or when washed over by a wave. The self–inflating dan buoy remains easy to see all the while. The tall, highly visible dan buoy provides a stationary reference point near your less visible man overboard. At night, the light reflective tracer woven in to the Reelsling line makes it easier to see, to avoid fouling in your propeller. The strobe atop the dan buoy is also easy to see. Furthermore, generous use of SOLAS light reflective tape on the float’s perimeter makes it easier to spot the float.

If the Reelsling gets deployed without its tail made fast to the mothership, or if the retrieval line gets completely tangled in your propeller, or on a floating tree trunk, or lost, your MOB will be ever grateful for the floating dan buoy, with its own supplementary flotation, strobe and whistle, while you come up with plan B for recovery.

Ahead of need, consider how you can employ a multipart block–and–tackle purchase for mechanical advantage hoisting your crew aboard. For an instant mid–line attachment point, you can tie into the retrieval line a Butterfly loop, a bowline on a bight, or an overhand loop (last choice because it can be hard to untie). Thereto attach a halyard or block and tackle for lifting. Better yet, on sailboat or powerboat, an alternative to lifting crew out of water with the Reelsling is using the SOS Marine Recovery Ladder. It enables very quick exit from overboard for uninjured, non–hypothermic crew. Injured or hypothermic crew can be parbuckle lifted on board while remaining horizontal. Soft construction of the Recovery Ladder avoids injury from conventional boarding ladder or swimstep crashing down on crew in a seaway.

If you need only the replacement deployment bag, it is available separately. It will also fit Lifesling, Lifesling2, and Lifesling3 products.

Be the first to review “Reelsling™” Cancel reply