You are here: Home » Safety at Sea » Man Overboard Survival Story to Learn From 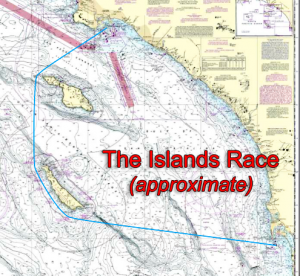 Recently I met with a man overboard survivor who fell overboard in the 2011 Islands Race off of the southern California coast. The one-on-one meeting allowed me a personal perspective of man overboard survival and the unexpected problems that arise. The race entails sailing from Long Beach to San Diego leaving Catalina and San Clemente Islands to port. Total race length is 129 miles.

This man overboard survivor, who was sailing on a 50′ yacht, shared his story with me with the hope it may help save a life in the future. While his close friends know who he is, he prefers to be known as "Bill" for the purpose of this interview. Here is Bill’s man overboard survival story.

Philip: Hi, thanks for taking the time to talk to me today about this frightening experience. Could you please set the scene for me that night before you went overboard?

Bill: The race is usually scheduled for February or March each year. This particular year (2011) it was held in early March. We started on Friday afternoon in strong winds. The sky was overcast and bleak. We beat to the island and rounded in choppy conditions. Daylight Savings Time had not started yet, so darkness fell soon after we rounded Catalina. We set our spinnaker and began surfing down the backside of Catalina toward San Clemente Island.

Philip: How strong was the wind at that point?

Bill: We had gusts of 20 knots and large swells, perhaps six feet. We surfed some great waves. The night was very dark. With the overcast sky, there was no assistance from the stars or the moon.

Philip: Was the boat generally under control?

Bill: Yes, we were in the groove and feeling very comfortable. We had experienced sailors on board with thousands of racing sea miles and decades of sailing experience.

Philip: With all of this experience on the boat, how did you end up going overboard?

Bill: I went to the bow to prepare for a gybe. Because it was so dark, I had a small headlamp to help me work on the foredeck. The light’s headband had broken earlier, so I held the light between my teeth. As I reached for the lazy guy on the port side, the yacht suddenly rolled to port, then back to starboard. This quick roll threw me over the spinnaker pole, which was low because we were flying an asymmetrical spinnaker, and flipped me over the life lines. I initially held on to the life lines from outside the gunwale, but with the extra weight of my then wet clothes, it was very hard to hold on! Quickly after that a wave washed me away. When I resurfaced, I was past the stern of the yacht. The helmsman’s eyes met mine, so I knew someone was at least aware I had gone overboard.

Philip: What happened next?

Philip: What rescue items got thrown overboard for you?

Bill: Well I really didn’t know at the time that anything had been thrown. I saw nothing to swim to. My initial moments were spent getting out of my foul weather gear so I could stay afloat. Once I shed the excess clothing, I began to feel exhausted. Had there been anything to swim to more than 100 feet [30 meters] away, I believe it would have been extremely difficult to reach. The sea state, the cold water, and my exhaustion worked against me. I’m told my shipmates threw many things, but in the darkness, with the sea state, I never saw a thing. It’s likely that whatever they had thrown blew away. I subsequently learned that one item, a widely used man overboard marker device in a rail-mounted enclosure, was deployed incorrectly, then apparently sank to the bottom.

Philip: Since you knew that your shipmates realized you had gone overboard, I guess you were not too concerned about being rescued, even though the conditions were rough?

Bill: Well not exactly. I quickly became very concerned. The yacht had its spinnaker up and was sailing very fast away from me. They did not stop straight away. It didn’t take long before I was feeling very alone and scared. In the general blackness of the night, all I could see was the boat’s mast light, now and again, depending on the swells. I could see the boat getting farther and farther away from me. I was getting cold and was having a hard time staying afloat. I began to think I was not going to make it. It was so dark and rough I could not imagine how they would ever find me. I began to have very negative thoughts.

Philip: I can’t imagine being in this position, I guess your mind starts to race.

Bill: Yes, my mind was like a barrage of lightning bolts covering such a huge spectrum of things.

Philip: Did any other boats pass close to you?

Bill: No. Even though a “Pan Pan” MOB radio alert was broadcast, not one boat passed close to me. There was no way to see me, a lone head bobbing in large whitecapped seas on a dark, boisterous night. With the roar of the wind and the bow waves of boats surfing through the water, I was not confident they would hear me, had a boat passed by close enough to yell at.

Philip: Obviously your crew did find you, so how much time passed before the yacht got back to you?

Bill: The crew told me it took them around ¾ of a mile before they got the spinnaker down and started to head back to the spot where I had gone over. The crew was in a panicked state and the mainsheet had come free. It was about 20 minutes before I started to see them.

Philip: I guess you were relieved to see them and thought the ordeal was nearly over.

Bill: That was my initial thinking but my perception quickly changed. I soon realized that, although they were close, just several hundred yards away, they had no idea where I was. Thankfully, someone had immediately pressed the MOB button on the GPS, so they were able to return at least to the exact spot where I had fallen in. Yet still, they could not see me, as current had carried me away from my initial fall overboard. Remember, it was nearly completely black outside, with moon and starlight obscured by the cloud layer, not to mention the large swells and whitecaps sometimes blocking me from any view they might have had with a search light.

Philip: So how did you get found?

Bill: Well it was a stroke of luck. When I went overboard, the head lamp in my teeth went over with me. I had lost it in the fall but it managed to float. And it wasn’t even supposed to be a waterproof model! One of the crew saw the little light and figured I was nearby. In fact I was about one hundred yards away, but it was floating directly downwind from me. When the crew arrived at my still-floating headlamp, they used a searchlight to scan the area. The searchlight battery died after one sweep! But I yelled very loudly. In that one sweep of the searchlight, I was seen.

Philip: That must have been a huge relief!

Bill: I can’t even tell you. It’s indescribable.

How Do You Get a Man Overboard Back On Board?

Philip: Was getting back on board a challenge?

Bill: Yes, this was no easy task. With the rough seas and my weakened state, it was quite the process. When the yacht came alongside me, the owner of the boat grabbed me and would not let go under any circumstance. Eventually, enough people grabbed hold of me that I could get one leg up to the gunwale from the water. Once one leg was up, the crew was able to pull me onboard. This was not an easy task by any means and it took awhile.

Philip: Having survived an actual man overboard emergency, what did you learn?

Bill: Well I think most crews treat safety at sea too lightly. Nobody thinks it will ever happen to him. But things can go wrong, which can happen very fast, not usually at an opportune time. Having thousands of sea miles or many years of racing experience does not necessarily insulate a crew from every eventuality. Here is my advice.

Different boats have different equipment. Ensure the entire crew knows how to use your safety gear. Points to note here: 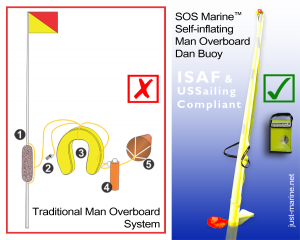 SOS Marine dan buoy easier to train, use, and stow, cheaper to buy, less to maintain

Philip: And of course, harnesses and jacklines are appropriate when circumstances warrant them. The problem is that people sometimes fall overboard when they are least expecting or prepared. As you are aware, my company is marketing the SOS Marine Dan Buoy MOB self-inflating device from Australia. It was developed for rough conditions typical of offshore sailing such as often encountered in the Sydney to Hobart Yacht Race. Having seen this device, what are your thoughts about it as a man overboard marker or man overboard pole replacement?

It eliminates many of the problems with other devices typically used right now. Because it can be kept within easy reach of the cockpit and is so easy to deploy, it is also very fast to deploy. I noticed there is no preparation required (beyond the initial installation of the CO2 cartridge ahead of time). You Just Throw it, in its valise, and that is freely, quickly, and easily trainable.

It would be the first item to hit the ocean in an emergency; when it self-inflates, it’s findable. You showed me how large the sea anchor / drogue is, and I really like that. That will keep its drift to a minimum. (Click to see overlay on this page)  [The dan buoy] is clearly very visible at day time with its day-glow fluorescent color and the auto-activating strobe light on top will make it easily seen at night. I saw it had a whistle for sound signaling in fog.

The [SOS Marine] Dan Buoy would have been ideal in my situation. I was getting tired in the cold water, and the added buoyancy from the arm straps would have been appreciated. I think you have a great product. I definitely want one on my boat. I like that it’s portable so I can take it on a friend’s boat with me. That’s pretty handy.

Philip: Thanks for sharing your ordeal. Clearly you are lucky to be alive. I hope your fortunate ending will allow more man overboard victims to be as fortunate. Sailors looking for further guidance on procedures and requirements should refer to the World Sailing Offshore Special Regulations.

Click to learn about the US Sailing USSER update effective 2014-01-01. Applicable to all racing yachts compelled to carry a man overboard pole, this update specifically accepts the dan buoy in satisfaction of the man overboard pole requirement.

1 thought on “Man Overboard Survival Story to Learn From”